“              I give to pay homage to my mother and grandmother, the ingenious givers who carved a way out of no way. The power of generous giving is within all of us. For me, just as with my grandmother, the fire of my soul is in giving back.”
#WhyIGive

Michael Chatman is America’s leading connector, navigator, and broker in the field of philanthropy and charitable giving. For more than a decade, Chatman has been on a mission to give a voice to the everyday philanthropist and raise the level of generosity across the world by encouraging collaborative approaches to work, networks, and the deployment of resources to solve problems.

In his current role as the Chief Executive Officer of the Cape Coral Community Foundation, and the Center for Global Philanthropy, he has built a community of givers on the idea of inclusive philanthropy.

Chatman is also the founder and host of the weekly Twitter talk show #WHYIGIVE, the fastest growing generosity movement in social media through which he engages and connects with his more than 325,000 followers on Twitter, and his global network of generous givers, philanthropy leaders, and everyday humanitarians. He is also the host of the weekly podcast The Michael Chatman Giving Show that airs each Thursday on Unity Online Radio.

Michael pushes us to rethink not only how we give, but more importantly, how we live, teach, and work.”

Chatman has been honored for his work as a charitable foundation executive and entrepreneurial journalist in philanthropy. Chatman was voted America’s Maverick Philanthropist and one of the nation’s leading social media influencers in philanthropy. Nonprofit Times Magazine has recognized Chatman as one of the most influential philanthropic leaders in America.

Chatman is a former All-American football player for Missouri State University and child of a single mother who instilled a love of giving early in his life. When not traveling the country speaking about philanthropy he makes his home in Florida.

Impact
The World
Living and giving generously are inside each of us. Finding the will for a mindshift is the key.
Start Now >
Join
The Conversation
Join Michael every Tuesday at 8:00pm for one of the week’s most inspirational hours on Twitter.
Join Us >
Grow
Your Reach
Connect your cause. Learn how cause marketing collaborations can move your cause forward.
Learn More >
Additional Resources:
Next Generation Philanthropy
Why Today’s 20-, 30- and 40-Somethings Are Giving More Than Money
- And How You Can!
Download > 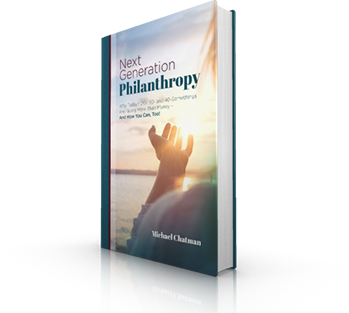 Join our newsletter:
The Business of Giving
- Newsletter Published by Philanthropy Media